The Distinction between the Two- R Vs Python

R programming language is an open-source programming language and free software, owning one of the richest ecosystems to carry out statistical evaluation and data visualization. R programming language features a wide catalog of statistical and graphical methods, including linear regression, time series, machine learning algorithms, statistical inference, and more. It also enables complex data models and sophisticated tools for data reporting. Data evaluation with R programming language comprises some small steps, namely, programming, transforming, discovering, modeling, and finally delivering the results. When it comes to communicating results, this is where R really stands out. R has an amazing range of tools, which allow results to be shared in the form of a presentation or a document, making reports both elegant and mundane.

On the other hand, Python is an object-oriented, general-purpose, and high-level programming language, emphasizing code readability through its substantial use of white space. Python is comparatively intuitive to write and understand, making itself an ideal coding language for those looking for quick development. 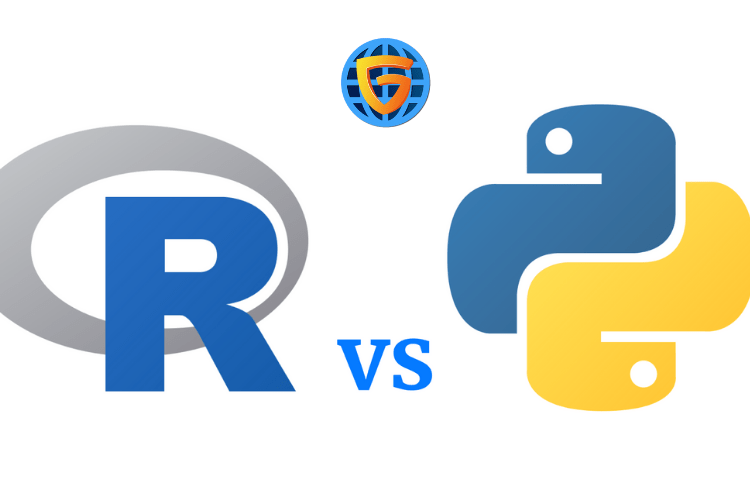 Learning Curve
R programming language seems to be quite difficult for beginners to master due to its non-standardized code. Even some experienced programmers find it clunky and awkward sometimes. While Python programming language is a way easier and attributes a smoother learning curve.

On the other hand, the R programming language is generally used in universities and the research industry. Even though industry users are in favor of Python, they have started considering R because of its effectiveness in data manipulation.

Packages
Thousands of open-source packages are offered by both R and Python programming languages that one can use in his upcoming project. However, R proposed a CRAN and even hundreds of less standardized alternative packages to perform a single task, resulting in making it difficult to learn.

On the other hand, the packages of the Python programming language are more customizable and efficient; however, they are less specialized towards data analysis tasks. In short, Python will be an ideal choice to build a full-fledged application. Moreover, R comes with specialized packages for statistical purposes and is very good at manipulating data from the most popular data stores.

Speed and Performance
Python is a high-programming language, the perfect choice to construct crucial applications fast. However, sometimes R requires longer code for even simpler processes. Moreover, in relation to execution speed, there may be a minimal distinction between both the programming languages as each one is capable of handling massive data operations. While R and Python are not as rapid as a few compiled programming languages, they work across the problems permitting extensions primarily based on C / C ++. Python and R statistics evaluation may be achieved at a C-like pace without dropping expressiveness or dealing with memory management and several other low-level programming concepts.

Build up your career with Python by enrolling for a Python Course in Noida at GICSEH.