Java is a high-level programming language, specifically object-oriented, that was developed by Sun Microsystem and released in 1995. Java can be run on several platforms like Windows, Mac OS, and different versions of UNIX. In today's electronic era, Java core is the fundamental thing that one could be well aware of, whether it is the mobile phone, Smart TV, or any other device. If you want to make your career in the programming field, you must be familiar with Java. It shows the vitality and the wide usage of Java. As of its title, Java is purely object-oriented because of its lack of global scope. The Java programming language offers a facility to arrange the classes in the packages. The sample object model of Java can be easily extended or changed. Due to these special attributes, the programming language Java can also be called a revised version of C++.

Let us have a detailed discussion on how Java is an object-oriented programing. It is a type of programming in which programmers tell the data type of a data structure and the sort of functioning that can be implemented to the data structure. 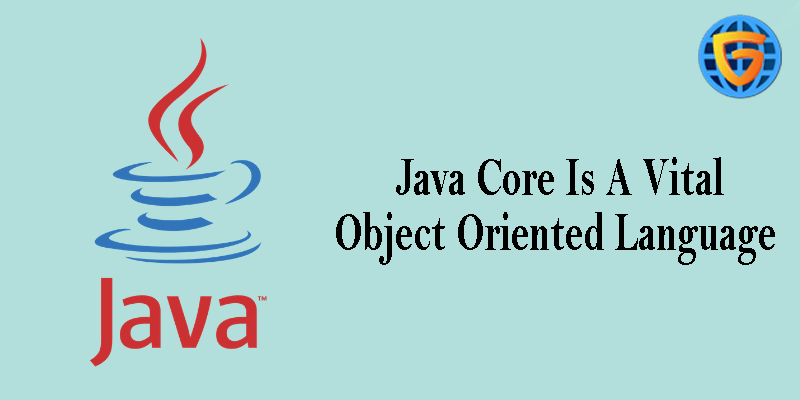 These are the main basic principles of [oops] ie object-oriented programming-
1. Inheritance- It helps in reusing the code and setting up a relationship between various classes.

2. Encapsulation- To lock up your data for safety purposes to avoid any other changes. We can introduce encapsulation in Java by proclaiming the class as private or giving a public setter and method to change.

3. Abstraction- To deal with different ideas rather than affairs and show only relevant things to the customers, instead of extra irrelevant details. Hence abstraction deals in avoiding the complexities in the procedure.

4. Polymorphism- A potential of OOP language to distinguish between the organizations of the same name effectively and efficiently. Java gets it done with the help of the declaration and signature of the organization.

Java core is one of the most useful and popular languages due to its magnificent features, which specifically play a vital role in the popularity of this language. Here is a detailed description of its features.
1. Easy and familiar language- Java has a very simple coding style that is easily accessible, unlike C and C++, which have a complex coding pattern. This language is familiar because it is more like C and C++, and it avoids the complexities, confusion, and drawbacks of C and C++.

2. Systemize and illuminate the type of language- Generally, computer language is either compiled or illuminated; however, Java has the power of both as it is a systemized language along with the flexibility of interpreting. Java gathers the source code into byteS, which is then implemented by a Java virtual machine that is feasible on many operating systems.

3. Independent platform- By using the concept of BYTE code, Java provides a facility of movability, which strengthens it, and ultimately is considered the most remarkable feature of Java. Due to its independent platform feature, a program gathered on one machine can be accomplished on any other, across the world, without any changes.

Java is a highly multipurpose object-oriented language, specifically used in the creation of a mobile application. So now, let us know what genre of software is used in a language-making machine and how we can use it.
App for mobile- For the android platform, especially Java is observed to be the best language for mobile application creations. Since the mobile operating system itself is made up of Java, if anyone wants to make an android app, the necessity to learn Java programming language rises to a great extent.

App for banking- Java is appraised as one of the fastest and safest programming languages. Due to its secure nature, Java is considered the best for making an app for banking purposes.

Application for web- In today’s time, better versions of web applications can be made using Java technology. Complex web pages are made by using servlets, JavaScript, etc.